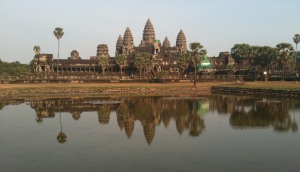 I’ve recently had the opportunity to travel through Cambodia – a country still struggling to overcome a chaotic and tragic recent history (for a brief summary visit the BBC website), but now benefitting from substantial international aid and the positive energy of its youthful population (50% of the population are under 25 years old). A visitor to Cambodia, and Phnom Penh in particular, cannot help but notice the country’s emerging potential.

Cambodia currently faces a range of deep-seated problems. Revenue from natural resources has not fed back into the public purse. Political freedom is limited. As you travel from one village or town to the next, it strikes you that the grandest buildings tend to belong to one of the three main political parties.

The majority of the rural population subsist rather than prosper. Of the 14 million population, 4 million live on less than $US 1.25 per day (the US dollar being the de facto currency). Furthermore, 37% of Cambodian children under the age of five suffer from chronic malnutrition.

In economic terms, the clothing manufacture sector predominates and accounts for 75%-80% of current exports. Silk is a traditional speciality. However, a visit to local silk farms illustrates one of the major problems facing Cambodia: it is uneconomic to produce silk through local silkworms, so raw silk is usually imported from China. The silkworms are mostly on show for tourists. Much of the revenue derived from the silk retail trade goes directly to international raw silk producers. This is despite Cambodia being the traditional home of ‘golden silk’, a unique and natural raw yellow silk.

Given these and other significant issues, it may seem odd to highlight the potential of the country. However, there are also many causes for optimism, not least the ordinary Cambodian people you meet.

The radically improved road network, largely the result of substantial Chinese aid in recent years, has ensured regional centres are more accessible and a railway network – funded by Australian aid – will further improve the current situation.

Despite an over-reliance upon international aid and clothing manufacture, the economic fortunes of the country are improving swiftly. Tourism is a substantial factor (Cambodia now welcomes more than 2.5 million tourists each year). National GDP grew by more than 6% per annum between 2010 and 2012.

Whilst Siem Reap is the most obvious illustration of the burgeoning tourist industry, Phnom Penh best highlights the changing dynamic in Cambodian society. A vibrant and energetic capital, it retains its French colonial heart, but a modern city is fast developing. As the wide range of high value cars travelling around the centre attest, a middle class with disposable income is emerging rapidly. The skyline is another barometer of wealth and Phnom Penh’s first skyscrapers are now nearing completion. Whilst no Ho Chi Minh City or Bangkok, the current rate of change is nonetheless impressive.

A further interesting trend is emerging. English language is king.

Despite its origin as a French protectorate, there is phenomenal interest amongst the country’s young population in English language courses. Stores across Phnom Penh brim full of books to support both guided courses and self-taught learning.

Indeed, English language testing centres are opening across the city, with the IDP’s Australian Centre of Education being the first but now certainly not the only place to formally learn the language. A course / test of English at roughly $200 can seem prohibitively expensive in a country where the average monthly wage is $50, but demand is high.

There has been a similar growth in interest and participation in tertiary education. Despite being low in comparison to other countries in the region, World Bank statistics demonstrate that enrolment rates in university and higher vocational education have increased from 3.4% of the cohort in 2005 to 14.5% in 2011. With private sector institutions accounting for a substantial percentage of higher education enrolments, the rise in participation is again indicative of the increasing wealth of the population.

In summary, there are significant and deep-seated structural problems in Cambodia, but signs a stronger economy is developing and – with it – a real interest amongst the young population to better themselves through education.

Ecctis is a gold-standard provider of solutions and services in international education and training, and in the development and recognition of globally portable qualifications. We are an internationally trusted and respected reference point for qualifications and skills standards. View all posts by ECCTIS

This site uses Akismet to reduce spam. Learn how your comment data is processed.